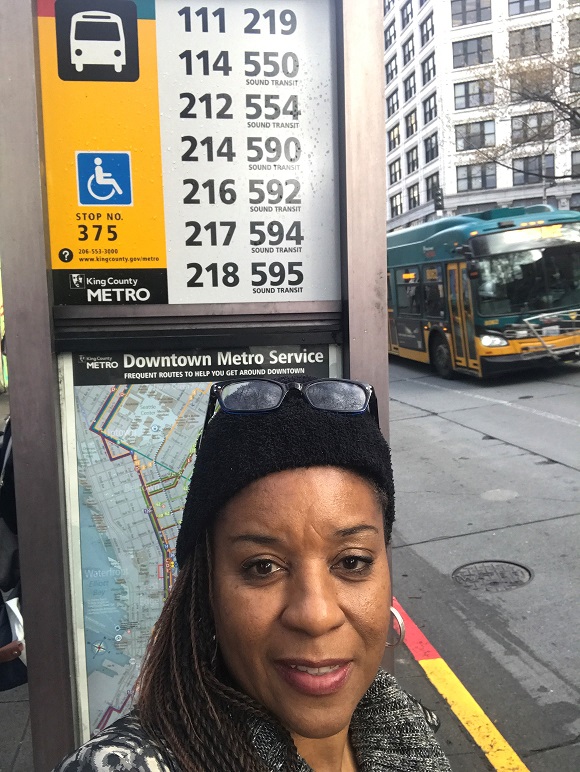 And how I dealt with Route 550 move out of the Downtown Seattle Transit Tunnel onto surface streets!

Editor note: Phyllis is the newest member of the Choose Your Way Bellevue Outreach team. While you can find her commuting from Columbia City to Downtown Bellevue using light rail and the bus for work, she’s most happy when she’s out riding her bike for transportation or recreation!

Whenever I can park my car, walk, bike or take transit, or light rail, I do it. I’m highly energized and like the outdoors and doing things that are productive towards health, fitness and the environment. This way I can contribute to all three. Riding my purple and red Kestrel bike gives me a sense of freedom and makes a daily gym routine seem hard. Pedaling on a fresh and crisp morning is quite exhilarating and prepares me for what is next to come.

I live a few blocks from the Columbia City light rail station and although I prefer biking for a commute to work, taking the light rail and bus is more efficient. The walk to my neighborhood station is quick and I can hop on the Link and head to the International District.  My commute to Bellevue offers various options via the bus and light rail and takes about an hour from start to finish without having to sit in the heavily congested traffic that Seattle is incurring more rapidly as the city continues to grow. Not bad, right? 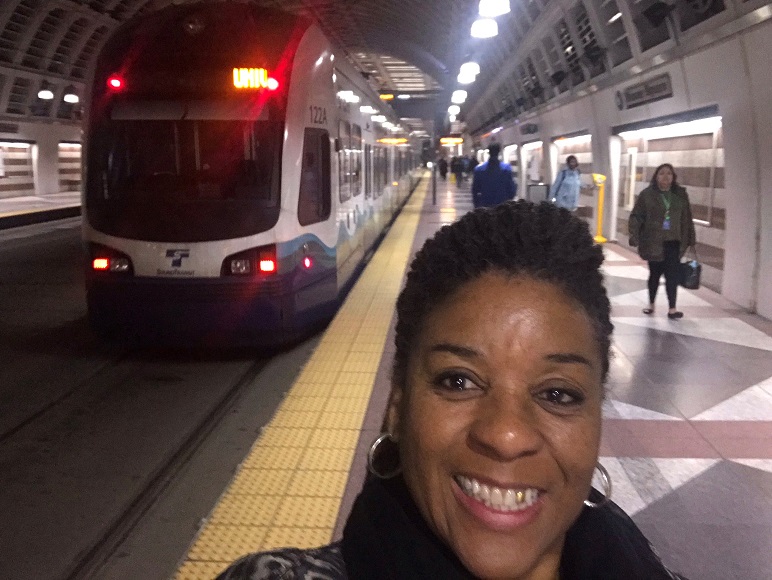 Day 1– This week I chose the light rail and the bus, Route 550 from Seattle to Bellevue. My first day was a little challenging as the 550-bus route had changed. Learn more about buses moving out of the Downtown Seattle Transit Tunnel on Choose Your Way Bellevue’s Seattle Squeeze for Bellevueites page. I approached Bay 2 of the transit tunnel and noticed there were no buses in sight and a large detour sign that included information and a map. 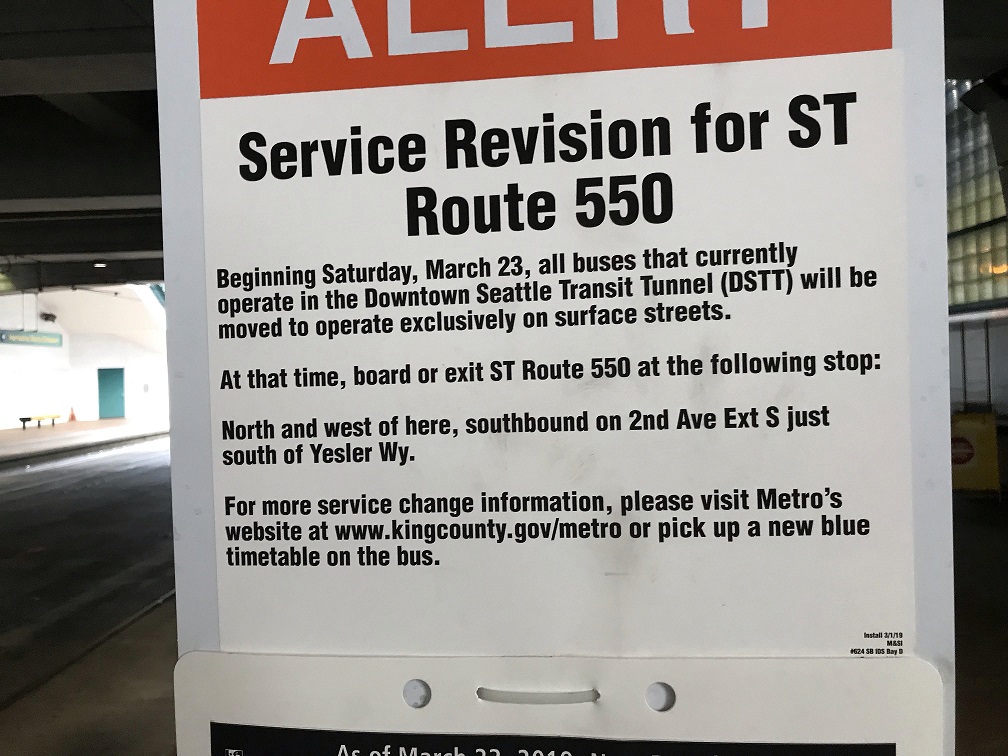 I read the information and learned that the Route #550 bus stop was now located six blocks north at Yesler and 2nd Avenue. After reading the information, and reviewing the map, I walked upstairs and outside the tunnel and headed north. My eyes stared in the direction of where the bus would depart. At that moment I could see the bus and the doors were closing. I waved my hand to get the attention of the bus driver and jetted pass a lady that was trying to make it to the bus. I got there first and by the kindness of the bus driver he waited a few extra seconds to make sure she made it on too. A lesson learned, be prepared. Check the bus sites prior to taking the bus. Change happen, and Metro is very informative about route changes with posting given prior to the change.  You can sign up to receive alerts for your favorite routes with both Sound Transit and King County Metro. So, if you don’t ride frequently, don’t do what I did, check the route first. Lesson 1 learned. 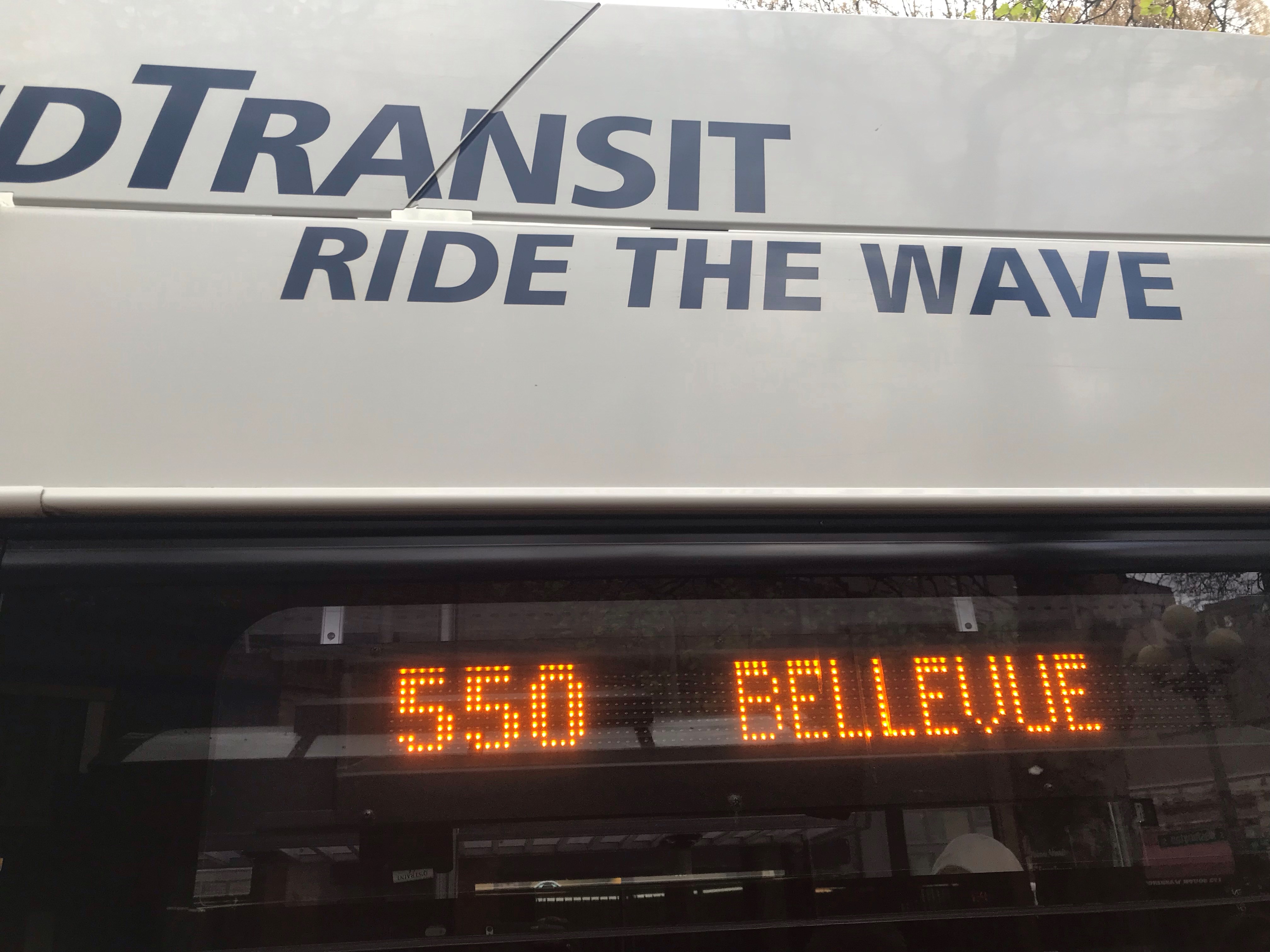 Day 2– The second day was a breeze. I took the light rail from Columbia City and got off at Pioneer Square which was one stop beyond the first day. Walked upstairs out to Yesler and 2nd and here come the 550, hey that’s my bus? Yay! I thought this was much easier than walking up the stairs and across to the other side to catch the bus after getting off the Link to go to Bellevue on the prior route. People at this bus stop were lined up in an orderly fashion and I found my place at the end of the line. Next, I stepped on the bus, used my new ORCA card, found a seat and enjoyed the ride. It’s a 30-minute commute and the bus drop me off less than a block away of my destination. This is so easy!  Was there a lesson learned? Yes! Prepare, use the info that listed on the web, and plan your ride. I did, and my ride was very efficient with no bumps along the way. 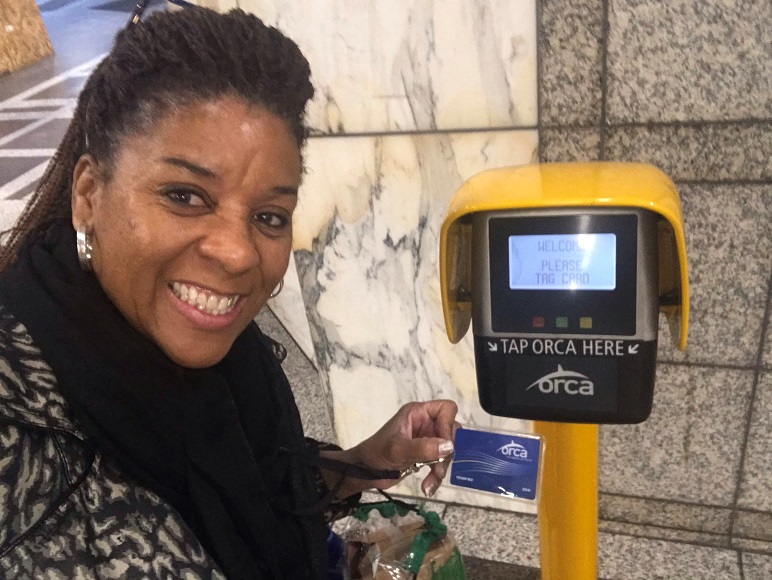 Day 3- Headed out the door at 7:15 a.m. taking the same route as yesterday. What challenges will I have today and, if so how will I handle it? 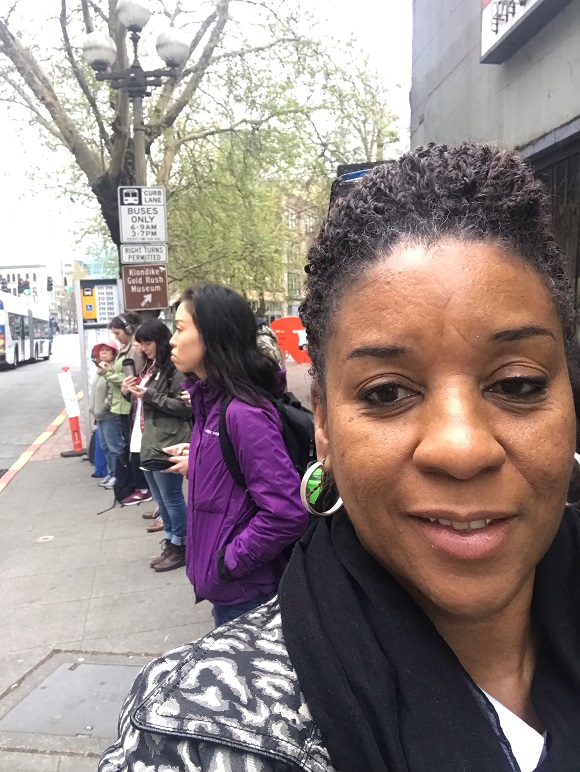 I enjoyed my light rail ride just a little too much this day relaxing in the moment that I missed my Pioneer Square stop. No problem, I got off at the next stop – University and walked over to the opposite side of the tunnel and waited for the Link. I heard the train notification arrival time announced on the intercom; “The next train will be arriving in two minutes.” I waited and boarded the next train and got off at the very next stop. Followed the same route as yesterday and there I see, from a half block away, people lined up to the right and I look to my left and see the #550 three blocks north. I crossed the street at the light twice and found my self at the end of the line again. I found a seat about three rows back, sat and enjoyed the ride while finishing up on a few emails on my phone. Thirty minutes later, I’m getting off the bus and walking toward work. 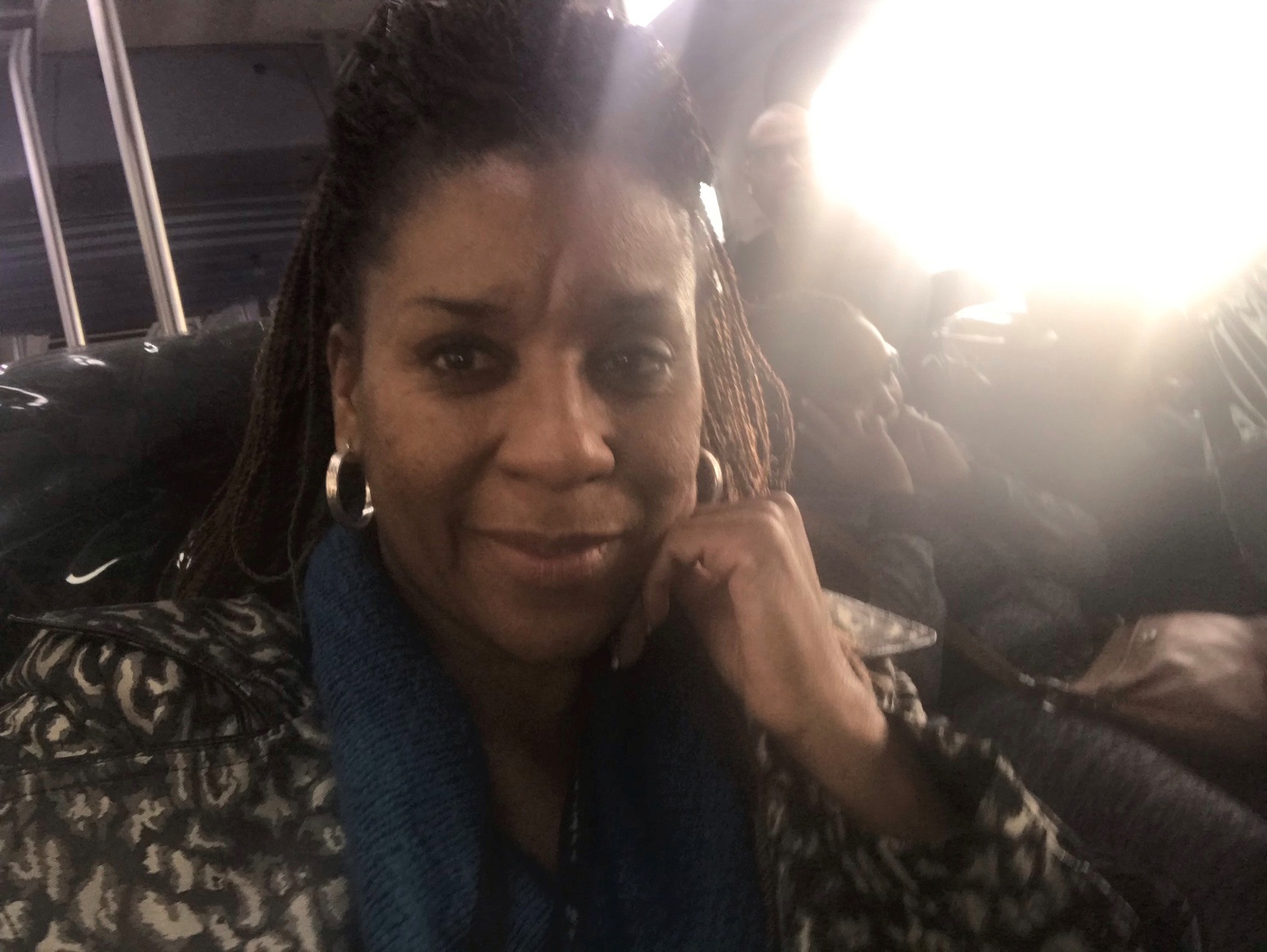 The first three days haven’t been quite routine, but I plan on having a standard routine yet with mixing it up a little. I can also take the Route #7 bus instead of taking the Link and connect with the #550. It may take a few minutes more, but as long as I get to work on time, I like the experience of learning different ways of getting around the city. I can also take my current light rail trip but extend it to UW and take the #271 from there to the Bellevue Transit Center. This keeps it fun and adventurous. I took advantage of the information that we share with commuters through our custom commute plans about taking the bus and other ways to get around without riding in a single-occupant vehicle. 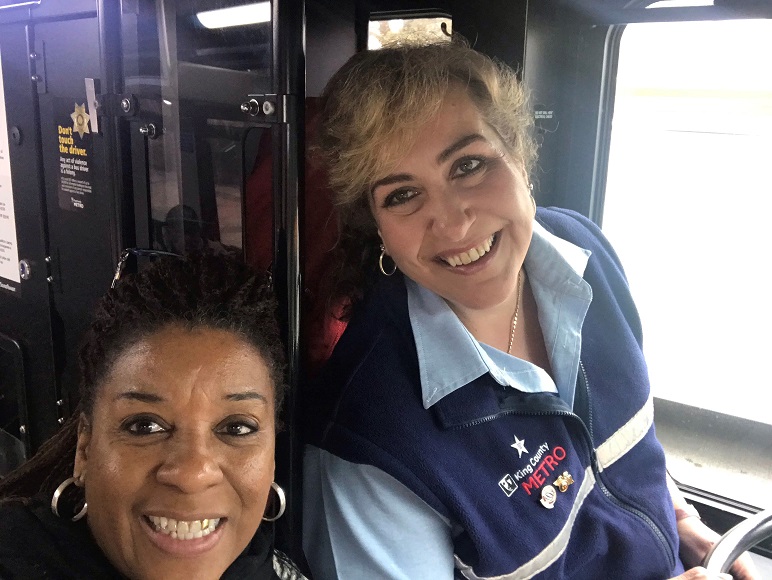 I used the King County Metro Trip Planner and learned how to map out the many different routes based on ETA. Next week I will try a different route and maybe next month I’ll move on to something I haven’t tried. Being new to the program, I appreciate Choose Your Way Bellevue information on getting around when not driving. I’m a morning person and energized about commuting. Feel free to share your experiences of your commute, you don’t have to be a morning person to do that! 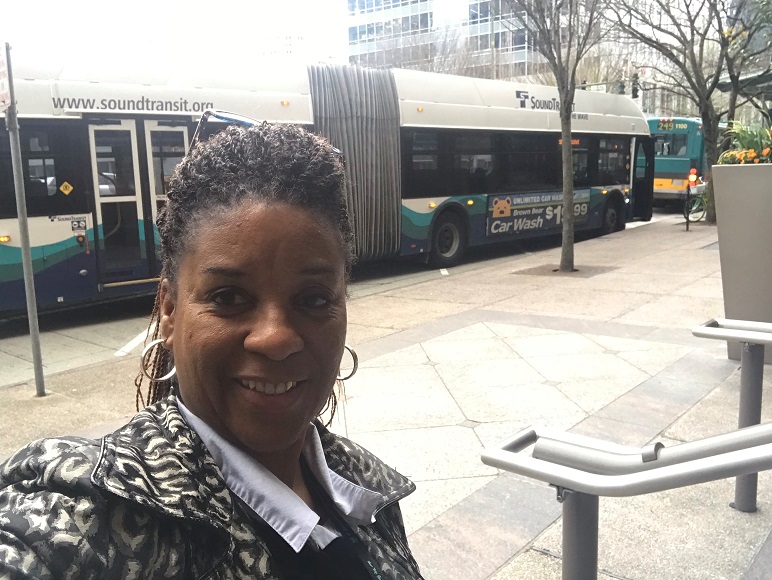 I enjoy all modes of commuting and hope that you will try one of the multi-modal ways of commuting while leaving your car at home. Happy Commuting!